My visiting author, this week, is historical novelist, Deborah Swift, who lives in North Lancashire in a historic village near the sea. 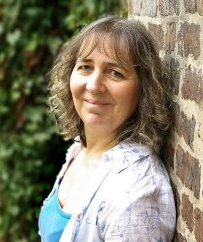 Deborah used to be a set and costume designer for theatre and TV, and so she loves writing fiction set in the pre-industrial era when women wore enormously complicated costumes, and everything was lovingly made by hand.

I’ve considered writing historical novels, myself, but am too impatient to get on with the story to do the leg-work on the research. Anyway, over to Deborah. 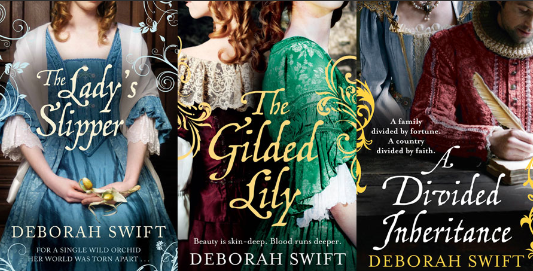 What is your favourite historical character?

I am a great admirer of other writers whose work has survived to today. Great inspirations would include Shakepeare, though I realise this is a bit of a cliché, and Pepys, whose diary gives us such a brilliant view not only of his times, but of how his mind worked, his relationships with his family and servants. I love things like Pepys blaming his wife for leaving her wrap in the carriage when she had earlier asked him to look after it for her. It just shows that although times might change, human beings are often just the same! I’ve just written an article on Queen Elizabeth I who I think paved the way for society to recognise women as intelligent, able, and just as politically astute as a man – so she would definitely be on my list of favourites.

What are the best and worst aspects of writing historical fiction?

The research is both the most intriguing and the hardest. I strive for historical accuracy, but also want to tell an engaging story. Without historical accuracy the book would have a very unstable foundation. Of course I might make errors, but they are unintentional. Some readers wish to be educated as well as entertained, and a faithful rendering of the period is what they expect and what I strive for.

What inspires you to write stories from the past?

I’ve always loved history, and I’m inspired by real events often using those as a starting point to work from. From there I ‘imagine outwards,’ like building clay onto an armature. The event that began my interest for my most recent book – A Divided Inheritance, was the Gunpowder Plot, which gave me the setting of Jacobean England, but I also researched Seville in Spain’s Golden Age. I was inspired by the crafts of lace-making and sword-forging, processes which were immensely time-consuming and skilled. This is one of the things that fascinates me about the past, the sheer amount of labour that went into making things we take for granted now. I also enjoy giving voice to women who are so often ignored in non-fiction narratives of the past. In my most recent book strait-laced Elspet Leviston expects she will take over her father’s business, but her father has other ideas. He brings home her cousin, a man she has never set eyes on before and who she dislikes on sight, and begins to hand the reins of the business to him. The appearance of this stranger sets in motion a chain of events that will lead Elspet to the bustling port of Seville, to the great mystical Sword School of La Destreza, and to a battle to save herself and her new-found Spanish friends. It was a thrilling book to work on and very enjoyable to write.

Tell me about your writing life.

I write in the mornings if possible, before I get chance to talk myself out of it! I write on the computer, but also have a lot of very scruffy notebooks with mad jottings scrawled on them in biro such as “make Grace more evil by chapter 4,” “don’t forget to add more backstory to the drowning,” “what did a bucket cost in 1660”…. etc etc

I read voraciously, anything and everything. I’ve just read two spy novels, and currently on the go are ‘Snobs’ by Julian Fellowes and ‘Burial Rites’ by Hannah Kent. Favourite storytellers include Jodi Picoult, C J Sansom, Rosie Thomas and Linda Holeman. Hell for me would be to be stranded on a desert island with no books and no reading glasses! Actually, I suppose I might get more writing done that way…

Many thanks to Rosie for hosting me, you can chat with me on twitter @swiftstory, which is how I got chatting to Rosie, or find me on my website www.deborahswift.com